After spending much of his career writing television episodes, Paul Haggis wrote the screenplay for Million Dollar Baby, leading him to fame and an Oscar nomination. Before that, however, he wrote, directed and produced Crash, belying his feature film inexperience to give us an intricate and powerful moral lesson.

In Los Angeles, people are separated from each other by so many barriers, there is absolutely no empathy for one another, or so this film would tell us. People are so tired of being hurt, they expect everyone is out to take advantage of them in some way, and behave with a paranoia to suit. Is it at all surprising then, that they can’t recognise good intentions? That they think there must be a catch? Not only can no-one in this film see anyone else for who they really are, they seem not to know themselves. There is a car thief who believes himself highly principled; a District Attorney whose only interest is how he can keep the ‘black vote’. These people, this world, is so filled with fear, that the innocent become guilty, and the Other becomes self. By structuring this film as many – I lost count – interweaving stories, he shows us a whole spectrum of scenarios with the same message… that there is the potential for good and evil in all, but by understanding one another’s perspectives we are more likely to live together harmoniously. A repulsive figure, violent and racist, who digitally rapes someone for being in the wrong place at the wrong time, and yet loves his father, and cares for him as he struggles with his nightly pain and suffering. An immigrant shopkeeper, so suspicious he believes he is constantly being screwed over, who is driven to violence, when all he ever wanted was to work his shop, be treated equally, and give his daughter the opportunity to succeed. A young cop, so revolted by racism in the LAPD he submits himself to humiliation, and then realises he may not truly believe what he thinks he does.

There was certainly a risk here of failure – the many storylines could be distracting, or not be closely enough drawn together – and yet Crash succeeds admirably. Haggis has made his point eloquently, and produced an entertaining film, which is moving, and yet, at times, hard to stomach. His balance, and his characters, allow Crash to become more than just a morality tale.

He could not have done this, however, without the excellent performances of his cast. Don Cheadle, so amazing in Hotel Rwanda, again leads, and he continues to reinforce his skill in Crash. Matt Dillon is surprisingly good, Ryan Phillippe shows a range not previously noted, and Thandie Newton is brilliant. Sandra Bullock is somewhat harder to believe in, and is perhaps the one lowlight in a series of great contributions.

There are several moving storylines, but the one I felt most resonated is that of the Iranian shopkeeper. His fear and mistrust, whilst essentially being a good man, lead him to do things he presumably could not rationally conceive of, and it is only through great luck he does not commit the greatest of tragedies. His relief, and his new insight, are the hope that Haggis wants us to feel. That in spite of our fears and our prejudices, the Others are just like ourselves.

Crash has a veritable smorgasbord of big names on offer, and it’s the multiplicity of storylines that makes the film so watchable. If you’re less than impressed with one of the narrative threads you only need to wait moments before another one will be up on the screen. Racial intolerance is the one theme that links these stories together, and Crash brilliantly depicts the many forms – from insidious to blatant – in which such prejudice manifests. Some characters are just letting their fears get the best of them, others have political motivations, whilst some simply feel hard done by. 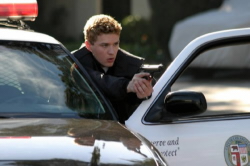 There must have been many many edits of this film – to find the right pacing for a feature with so many interweaving tales would have been hard work… and I don’t think this edit was perfect. It was annoying to have to sit through further resolutions once the most powerful point in the film had been reached.

The cast all does a great job. I actually thought Sandra Bullock was particularly impressive and it’s fun to see rapper Ludacris philosophising over the evils of hip hop. Ryan Phillippe play a nice guy for a change (as opposed to Cruel Intentions or Igby Goes Down), and Jennifer Esposito was actually bearable here (as opposed to her performance in Don’t Say A Word). Brendan Fraser’s District Attorney was the only really disappointing part of the film, considering how great he’s been in the past (from the comedic – Blast From The Past – to the dramatic – Gods And Monsters).

There are some very compelling scenes in this film, and they more than adequately overpower the more trite moments. Thankfully the film only occasionally drifts towards the preachy, and most of the time simply attempts to explain how complex human interaction can be. How on earth you could get away with calling a new film Crash when Cronenberg’s adaptation of J. G. Ballard’s book is still in recent memory… now that is beyond me…