My relationship with James Wan’s horror output seems to be out of step with a lot of other viewers. When the acclaim came rushing in for The Conjuring in 2013, I found it a solid but uninspiring film. It was Insidious from a couple of years before that truly terrified me. After the disappointing Insidious: Chapter 2, Wan has returned with The Conjuring 2, another quality film that fails to do anything particularly inventive. 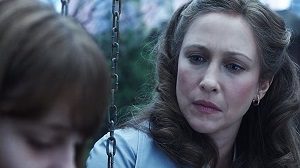 Patrick Wilson and Vera Farmiga return as the Warrens, investigators of the supernatural. Despite the fact that horror fans have already been treated to adaptations of their investigations into the Amityville Horror (multiple times over), as well as 2014’s Annabelle (itself a spin-off of The Conjuring), and 2009’s The Haunting in Connecticut, it seems there’s still an appetite for more Warren-inspired films.

The Conjuring 2 opens with their investigation into the Amityville house. It seems that, at least for now, this series is smart enough not to try and remake that story. From there, we move to the case of the Enfield Poltergeist. In North London, the Hodgson family are having trouble with hauntings in their crumbling abode. With sceptics on all sides, including those thinking the family simply want to make money from their story, it’s up to the Warrens to get to the bottom of the mystery.

It’s only after doing subsequent research that I’ve realised how much of the screenplay stuck to the facts of the case as reported. Obviously, the more outlandish moments involve a great deal of artistic licence, but many of the plot points have been plucked from reports at the time. I wonder if aficionados of the paranormal will appreciate this, or simply find the film boring as a result.

Wan truly excels as a director here. He knows horror like the back of his hand, and continually pushes the envelope, together with his cinematographers and editors. His films have great moments of almost total darkness, and I wonder if such cinematic preciseness could have been achieved in the days before digital photography and postproduction. There are a handful of scary moments that got to me here, and whilst it doesn’t come close to Insidious, it’s certainly scarier than the first Conjuring.

But at the end of the day, we’ve seen this all before. If you’re familiar with The Exorcist, Poltergeist or the made-for-TV version of ‘The Woman in Black’, then there’s nothing new on offer. Hell, even if you’ve only seen Wan’s other horror films, then you’ll be familiar with the tricks he employs. The performances are on point, the film is technically accomplished, but there’s nothing that pushes this into ‘instant classic’ territory.

←The Returned Season One & Two Goldstone→