Super Troopers was such a great comedy…It’s so sad to see Club Dread fall flat on its face. 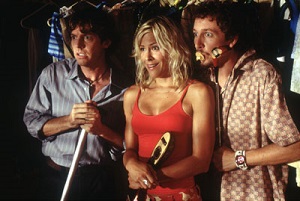 The strange thing about this comedy is that it could quite easily have been a serious slasher movie. All the plot elements are there, and there are very little jokes. Some of the gruesome deaths are quite inventive and there are a couple of actually chilling moments.
I’m beginning to think that comedy is a format ill suited to the feature film medium. I think it’s something to do with running time. With a straight comedy film (as opposed to a romantic comedy, which straddles genres) you have to decide exactly how much time will be spent on telling jokes, and how much time will be spent telling the story. If you spend too much time on comedy you get a film like Old School, which I found hilarious but had a weakly confused and rambling plot. If you spend too much time on the story you end up with Club Dread, which simply doesn’t have enough time in which to tell the jokes, what with all the horror movie twists.

That being said, there are two AMAZING jokes in Club Dread equal to the fantastic humour in Broken Lizard’s previous outing, Super Troopers. There’s a decent bunch of actors here, and the production values are pretty good for what was publicised as a throwaway comedy (in fact it looks a lot like the Scooby Doo set).

Super Troopers was a straight out comedy rather than a spoof on a well known genre, and maybe this is part of the problem. So much has been done with the gross-out and slapstick humour of the Scary Movie franchise, not to mention the intelligent and post-modern Scream saga, that there isn’t much material left in a horror spoof.

I will give the Broken Lizard team the benefit of the doubt, and hire their next film, but Club Dread simply wasn’t funny enough (especially for a 113 minute comedy).

←Troy House of Sand and Fog→