Cards on the table: I’m actually okay with Bad Robot’s method of building this franchise. Get a bunch of unrelated original scripts and then shoe-horn in a couple of references to a vague meta-plot? Sure thing. The Marvel Cinematic Universe isn’t quite as coherent as fans like to argue, so at least here there’s no pretending that it’s all been planned out in advance… 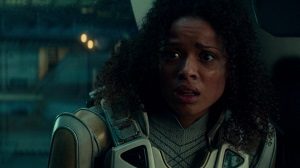 After impressing the world with 10 Cloverfield Lane, producers J.J. Abrams and Drew Goddard are back with The Cloverfield Paradox. Previously known as God Particle, it focusses on a group of scientists on a space station trying to solve the world’s energy crisis when something goes terribly, terribly wrong.

First off, the production values are solid. Despite its surprise straight-to-Netflix nature, The Cloverfield Paradox looks like a cinema release. The sets are fantastic and well-integrated with the digital trickery. The score is suitably epic, reminding me of Bernard Herrmann’s Psycho more than once.

Secondly, this is a stunning cast. Gugu Mbatha-Raw, David Oyelowo, Daniel Brühl, Chris O’Dowd, Elizabeth Debicki and Ziyi Zhang are all excellent. It’s is an incredible gathering of talent. Time and again, their acting prowess gets us through some really, really dunderheaded dialogue. O’Dowd in particular shines here. As with The Sapphires, he’s playing a dramatic role that’s afforded some really good punchlines.

It’s the script hampers what could have been an excellent film. Writers Oren Uziel (10 Cloverfield Lane, 22 Jump Street, ‘Shimmer Lake’) and Doug Jung (Star Trek: Beyond, ‘Banshee’, Confidence) needed to work through a couple more drafts. For example: in the first ten minutes, we get three scenes in a row that deliver the same information to the audience three times. There’s also some very, very dodgy science. I don’t know much about quantum entanglement, but I’m pretty sure the hand-wave explanations provided here are far from accurate.

In fact, this film could have been saved in the edit room. (Hey, it worked for Star Wars, so why not here?) Considering how last-minute Paramount’s sale to Netflix was, I have to wonder if Netflix rushed to release it because they wanted it to coincide with the Super Bowl ad spot they’d already purchased. They could have cut a good 15 minutes out and The Cloverfield Paradox would have been better for it. As it is, the film is hampered by over-exposition, resulting in plot twists the audience can see coming from a mile away.

In terms of the how this film affects the franchise, the links to the first two films are vague yet incredibly significant. Basically, it allows the filmmakers to do whatever they want. These efforts to layout the “rules” of the franchise, such as they are, tend to be a waste of a film (as with 2009’s Star Trek). I would have been happy with only the vague connective tissue present in the last film.

The Cloverfield Paradox is nowhere near as bad as some critics would have you believe. If you want to watch an Alien/Event Horizon/Sunshine mash-up, you could do a lot worse. There’s so much talent circling this project; it’s just such a pity they weren’t able to refine it before release.

The Cloverfield Paradox is available now on Netflix.