The Blair Witch Project has a lot to answer for, given its status as the harbinger of the ‘viral marketing’ craze that has swept the internet world in the past few years. For months the world of online science fiction movie fans has been buzzing with rumours and gossip, with websites devoted to analysing Cloverfield trailers frame by frame, and fans of J.J. Abrams whipping themselves into a frenzy. At last, Cloverfield is here and the big question is does it deliver?

Michael Stahl-David is Rob, a young New Yorker just about to jet off to Japan for a great work opportunity, whose friends are celebrating at a surprise going away party organised by his brother Jason (Mike Vogel) and Jason’s girlfriend Lily (Jessica Lucas). Rob’s best friend Hud (T.J. Miller) is filming it all so Rob will have something to remember them by if he is ever lonely while abroad. When disaster strikes the city, they will face incredible dangers in their struggle to survive.

To give away any more of the plot would be a disservice to the film and its marketing – despite fans spending many hours poring over every frame of the trailer, only hints at what the film is about have surfaced and the fun is really in the finding out. It isn’t ruining anything, however, to explain that the entire film is what is contained on the video camera Hud is carrying. The introduction of the characters through to their final outcomes… all is as seen via Hud’s lens. No further explanatory information is provided, with details given only through the characters’ interactions and reactions to their environment.

This conceit is maintained throughout, and is the most remarkable feature of this otherwise relatively straightforward disaster film – it is also its worst. That his camera manages to stay with the action at all suggests Hud has more experience than most, but the constant movement and intermittent loss of focus will provoke nausea in even the most tolerant of viewers. The technique is justifiable given the ‘video record’ conceit and thus far more satisfying and acceptable than the cinematography in films like The Bourne Ultimatum – perhaps we are supposed to believe Hud was following Jason Bourne across those rooftops in Tangier? That it is justifiable does not mean it is any easier to watch.

The character introductions are efficient and skilful (although many of them are never fully fleshed out people), and their reactions to what is going on around them are realistic and believable. The action is exciting and the gradual revelation of their foe, although reminiscent of the build-up in Roland Emmerich’s Godzilla and many other disaster flicks, allows the intrigue to build effectively. It is a bit of a letdown when everything finally becomes clear to the characters (and thus to the audience), however, and the decision to introduce ‘other problems’ (deliberately obscure) seems unneccessary and distracting.

Using an experimental technique to tell its story Cloverfield successfully manages to create tension and excitement in spite of the limitations it must endure, and yet without those limitations it becomes just another tale in which a ragtag bunch must survive catastrophe. For the fans who have so eagerly awaited it, however, Cloverfield is likely to satisfy.

I have to get this out of the way right from the start: do not see Cloverfield up close. Persuade, intimidate or beg with the cinema worker to give you tickets in the back row. This is not a movie you want to get too close to. Mark may spend a lot of time complaining about handheld cinematography, but in this case any complaints are warranted. You may remember people whinging about The Blair Witch Project back in the day… that film never bothered me, but here I was certainly getting a little queasy. 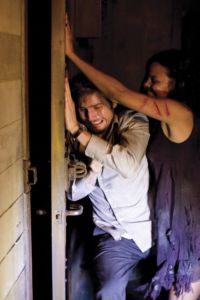 Frustratingly, there were times in Cloverfield when the camera could have been realistically steady, but it was still jumping around, and I found myself praying that the cameraman would simply put the damn thing down for a second. Or at least work out how to work the image stabiliser.

That the whole film is told through a camcorder is a stroke of brilliance as well as the chief source of annoyance. I’m not a fan of disaster movies with their ensemble approach – here writer Drew Goddard deliberately eschews such traditions. There are no cuts to the President, and the film is better for it. By sticking with a group of friends trying to survive the attack, Matt Reeves’ film manages to be epic yet intimate at the same time.

The interrelationships are actually quite well done, and I was thoroughly enjoying the soap opera-like plot unravelling before the disaster actually struck. In casting a group of unknowns J.J. Abrams and co. have made the film that little bit more believable – it simply wouldn’t work if Bruce Willis was in charge of the characters.

Considering the ‘event’ nature of this release, it’s actually a pretty good film. The ever-present threat of huge crushing death from above is rather effective, and there are enough high-concept set pieces to keep the proceedings interesting. That we have buildings crumbling and dust clouds sweeping through the streets of New York is more than a little interesting. I can’t imagine that many New Yorkers will be completely blasé about the concept, and it is a little telling that no one at any point mentions the ‘T’ word.

The special effects are used sparingly, and are fleeting at best. They are particularly effective however, and there must have been some pretty fancy motion capture goin’ down cos – as I said – the camera never stops moving. Honestly, I would have appreciated the film more if it hadn’t made me feel so ill.

The real test for Cloverfield was always going to be whether anyone would want to watch it a second time, and I think it has succeeded in this regard. Sure, it’s an Event Movie, and it all hinges on a pretty simple piece of marketing. It also happens to be a pretty good film. Certainly much better than Godzilla. Even if Ferris Bueller isn’t present to save the day.