Click. How do I loathe thee? Let me count the ways:

Firstly, it’s an Adam Sandler movie, and I’ve never been a big fan of his. I don’t find his childish humour or annoying voices amusing in the slightest and Little Nicky has to be near the top of my most hated films list (particularly cos it features so many cameos of respected performers). In fact the only film of his I really enjoyed was Punch Drunk Love, so if you are keen on his work, then feel free to go out and see Click regardless of what I say. 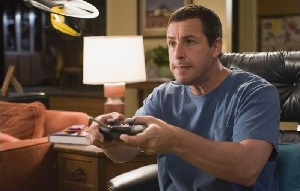 Secondly, this is an unofficial remake of It’s A Wonderful Life, long considered one of the greatest movies of all time, and in Mark’s top ten. I only saw Frank Capra’s brilliant 1946 film for the first time three years ago, and I’m quite proud to announce that for all its corniness it had me in tears by the end. The very notion that Sandler got his grubby little hands on this plot makes me shudder.

Third: one of Australia’s best known kids’ authors Paul Jennings wrote a story entitled ‘Spaghetti Pig Out’ which featured a magic remote control that affected living things with hilarious results. It was brought to life in the series ‘Round The Twist’ in 1989. I’m willing to accede that maybe many haven’t seen this TV show, but then again it has been screened at least two other continents (I saw it in Brazil for frig’s sake). Why is this a problem? Well, I’m feeling very patriotic just at this moment and it makes me angry when Hollywood doesn’t acknowledge that which has been done before.

Fourth: the first half (idiotic toilet humour, animals masturbating etc.) is suddenly pushed out of the way to make way for a very emotive and dramatic second half which makes the film feel incredibly awkward… and do you know what? It is EFFECTIVE. It got to me! I was stifling tears and quite frankly it made me feel dirty. WHY should I be reduced to a quivering wreck because of a movie that started out with a man farting in another’s face? What’s more, the jokes made courtesy of ultra-sexist/racist caricatures actually go further than being witty and insightful comments about our multicultural society, and in fact come right back around to being sexist and racist. To be subjected to all this potty humour and then have a dramatic core that actually affected me… I feel… well… violated. And I’m not happy about it!

And finally here come the supplementary complaints: Kate Beckinsale (Underworld: Evolution) looks ridiculous in this film, not only as the spineless wife of an annoying slob, but because she’s completely unbelievable as the oh so clichéd stay at home mum who looks like she’s just walked out of a hairdresser’s at any given moment. Christopher Walken’s here too, delivering another fine performance but he really deserves more. Damn it… even the Hoff deserves more!

To be honest, it’s not a bad film… there’s just two many fury inducing elements that prevent me from really enjoying it. It goes out of its way to appeal to both puerile gross-out comedy fans and those up for a decent chick flick and in the meantime simply pisses me off.

Perhaps envisioned by Adam Sandler and Co. as their answer to his lack of credibility, Click is an uneven and misdirected attempt at ‘dramedy’, that spends far too much of its running time on the prototypical Sandler ‘comedy’ before changing tack with a manipulative, albeit effective, heartstring-tugging final act. That all of this has been seen before, and better, is evidently irrelevant.

Sandler continues to labour under a lack of understanding of his place in the world. With the occasional highlight (The Wedding Singer, and for most, Punch Drunk Love, although I found it near-unwatchable) scattered throughout a career featuring such films as The Waterboy and Little Nicky, at least this can be said for him – he is still trying to break free of the expectations of both his past and his fans, but just doesn’t seem to know how. 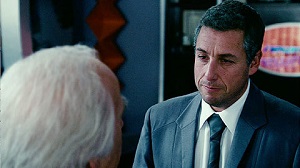 Big Daddy, 50 First Dates and Spanglish all seem to attempt to bring Sandler’s heart to the forefront, and are a long way from the early work in Happy Gilmore and Billy Madison. Although Click starts out with the seemingly obligatory gross-out humour with which he made his name, Sandler and director Frank Coraci rapidly transition this film into cautionary tale and life lesson. While the sentiment expressed is worthy, the handling of this shift in focus and the nature of the comedy in the first act significantly detract from the more meaningful final stanza.

That Click was marketed with a trailer featuring slow-mo of big-breasted women running and paused bosses getting their comeuppance is another problem – audiences just won’t be expecting where this film will travel. Those expecting more examples of the comedy on display in the trailer may be shocked to discover they’ve been lured into the cinema under false pretences. Perhaps this is emblematic of the underlying problem… Sandler feels obliged to his fanbase, forced to try to keep them onside, yet also wishing to attract those who don’t love his particular brand of humour but rather his softer centre.

Click features the usual collection of Sandler’s buddies, (Henry Winkler, Rob Schneider and new pal Sean Astin all appear), and those whose popularity exceed their talent (David Hasselhoff, Jennifer Coolidge). Kate Beckinsale made a strange choice to take the role of Sandler’s long suffering wife, and disappoints if only for the absolute blandness of her performance. The only of the cast to truly impress is Christopher Walken, whose turn as Morty is the highlight of an otherwise pretty disappointing cohort. That he continues to reinvent himself and produce characters like this is an absolute credit to him.

Click isn’t an awful film, but it feels too much like two separate tales rather than a single cohesive story to succeed. That it borrows heavily from classics like It’s A Wonderful Life isn’t actually such a crime – one suspects it unlikely the two will ever be confused – but the lack of a clear, unifying purpose leaves it wandering somewhat aimlessly.

←Over the Hedge Superman Returns→