Mark was so excited about this film. You should have seen him… like a schoolboy on the last day of term, or a Star Wars addict the day before the release of Episode 1. He even dressed up as Radha Mitchell on the day (not that this was a very successful illusion). I too was looking forward to this film, but had almost no expectations one way or another, having loved Pitch Black but unsure as to how a sequel would compare. 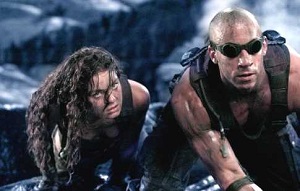 The good news is that The Chronicles of Riddick is good, solid entertainment. We are thrust back into a similar futuristic vision, albeit with a higher budget than first time around. It’s good to see that this sequel matches the tone of the first, because I was concerned that Diesel’s character might loose his edge in a sequel, and that it would end up being a bit like Rambo.

There are a few too many references to Pitch Black in Riddick. Reviving lines from the first film is fine, but are we really expected to believe that the characters will remember entire conversations and be able to repeat them verbatim?

This is written and directed by David Twohy once again, and it shows. There are similar moments (even those that don’t directly reference Pitch Black), and it’s certainly easy to see what sci-fi concepts excite him.

I did prefer the narrower focus of Pitch Black – I generally think that smaller scale sci-fi is more interesting than pan-galactic epics. That being said, it’s nice to see a film like this that isn’t a Star Wars or Star Trek movie. Here’s hoping David Twohy continues to populate this slightly darker and definitely multicultural universe in the future.

The Chronicles of Riddick