The incredible success – both artistically and financially – of the The Lord of The Rings film series has a lot to answer for.

It is now one year after the events of The Chronicles of Narnia: The Lion, the Witch and the Wardrobe, and the four Pevensie children are a little more grown up. The youngest, Lucy (Georgie Henley) still thinks longingly of their time in Narnia, and when the London train station they are in dissolves into a beach below a ruined castle, she and her siblings gladly begin exploring. Finding that far more years have passed in Narnian time than in theirs, they become involved in another great adventure to aid the titular Prince Caspian.

Although its predecessor certainly suffered many flaws, the list for Prince Caspian is almost too long to cover. The problems start with the four heroes; such a bunch of uninspiring whiners may never previously have been seen on screen. Lucy was the only one close to bearable in the The Lion, the Witch and the Wardrobe, yet even she is reduced to a pale imitation of someone interesting in Caspian. Peter is portrayed as boy apeing man, never considering the consequences of his actions, while Edmund is a self-righteous know-it-all and Susan, poor Susan, still doesn’t know which way the wind is blowing. First she doesn’t believe, then she admits she does but is too scared to admit it… these four kids are supposed to carry the film!

The eldest of the stars is Ben Barnes as the Telmarine heir to the throne, forced to escape after nearly being murdered by his uncle, Lord Miraz (Sergio Castellitto). Caspian is a curious mixture of scholar and wuss, and Barnes forces the audience to endure an apalling accent which simply adds to the sense of Caspian’s ineffectiveness that is already almost overwhelming. (The punchline from Aslan in the denouement goes some way to explaining this portrayal, but never satisfies.) Barnes may be hoping that his turn as Caspian will be a stepping stone to a major career, but we will have to wait and see if there is anything more to him than his hair, such is the mess he is involved with here.

The other characters are almost meaningless, lost in the haste to get to some swordplay, and this is another area in which the film loses the plot. The major battle scenes are technically proficient without ever being meaningful or emotionally involving, mainly due to the absence of audience investment in the characters. Putting a whole bunch of furry creatures in a castle to fight one another fails to be even interesting, as none of those furry creatures is known well enough by the audience to care.

That the most successful part of the film is its use of CG imagery is a marker of its scripting inadequacies – many of the creatures are wonderfully realised, although they still haven’t got the most important one right. Aslan’s facial animation just doesn’t work, but boy, does his mane look damn good. The river god sequence is a little clunky (and bears a remarkable resemblance to the sand demon of The Mummy), however the filmmakers have generally succeeded in integrating their CGI with the real actors. It’s just a shame about Aslan.

There are also walking trees (and the aforementioned deep river magic) that bear a striking, almost uncanny resemblance to those used to similar effect in The Lord of the Rings series of books and films. That Lewis had them in his novels is intriguing given his close relationship with J.R.R. Tolkien who had completed his epic saga before Lewis began his; however, their inclusion in the film just can’t be blamed on screenwriters who were forced to stick to Lewis’ book. It is a shame that this will detract from the enjoyment of Prince Caspian, but there’s nothing like bad timing.

Which leads, of course, to the disgracefully long running time of 147 minutes. That nothing very much happens and it still takes two and a half hours is remarkable indeed, and the overwhelming sense when watching Prince Caspian is of sheer boredom. Epic battles that are hard to invest in coupled with dull exposition, action set pieces that have already been seen in other films and characters that are difficult to get behind all add up to one of the more dreary screen events in recent years.

As with The Lion, The Witch and The Wardrobe, I disagree with Mark.

I enjoyed Prince Caspian almost as much as its predecessor. I agree, the film is sluggish at times, particularly in the beginning, but it turns into a reasonably fun fantasy flick. The major problems are probably ones that will resound throughout the entire series.

Firstly: Aslan’s still a selfish git. Without getting into the broader picture here, there’s something wrong with a character that can only teach through guilt. The amount of time this lion spends making characters feel guilty throughout both films is almost sickening. 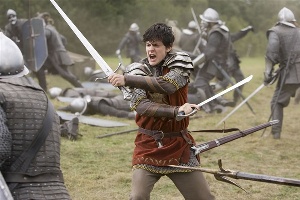 There are other ways to edify, though C. S. Lewis didn’t seem to touch upon them in these books.

Secondly: the kids are all masters of combat. I know, I should be used to this after the first film (in which they had a good two and half minutes of training), but it’s still hard to believe these weedy teenagers can swing a huge f*ckoff sword with such grace, or jump around like a ninja in full battle armour.

Aside from this, I thoroughly enjoyed Prince Caspian. The titular character is a bit of an underwear model, but I have it on good authority that he’s quite the hottie. His accent didn’t bother me really, since his people do belong to a made up country, even if they bear a striking resemblance to a real race. And Mark’s correct, the kids are a bit devoid of character, as it’s only really their faith that’s on trial here (which is always followed by the Guilt, of course…)

The animation is pretty darn good, though there are a lot of nighttime scenes here, which I suspect helped with cutting corners somewhat. The CGI critters look fantastic, though sometimes it felt like they don’t occupy the same space as the physical actors. There’s some fun new characters joining the franchise, and Eddie Izzard’s Reepicheep very nearly steals the show. Plus, seeing a talking badger always makes me smile.

The Narnia books make good adaptations mainly because they’re so short – fans will rarely get annoyed by plot excisions à la Harry Potter. I actually quite enjoyed the length of this one, and I suppose that filmmakers feel anything shorter would detract from the ‘epic’ status most fantasy films strive for.

←The Orphanage The Incredible Hulk→

The Chronicles of Narnia: Prince Caspian