Developed with the assistance of the Australian Film Commission’s IndiVision project, Sandra Sciberras’ second feature is a beautifully shot and brilliantly performed drama, and, like several recent Australasian titles, features a standout performance by a young actress in the lead role. 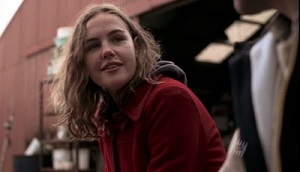 In The Caterpillar Wish, Victoria Thaine (Emily) shares much in common with Emily Barclay (New Zealand’s In My Father’s Den) and Emma Lung (Australia’s Peaches), and yet somehow she also stands apart. Forced to get by in a family scarred by past traumas, and longing for a way to find her father, she remains upbeat nonetheless, always hopeful. Her battle with the problems of others, and the gradual detrimental effect this has on her own life, form the basis of this film.

Thaine is excellent, at times cheerfully upbeat and at others frustrated, angry, hurt and disappointed. Her skill in displaying the conflicting emotions Emily experiences is matched by that of the adult stars who surround her – Susie Porter, Philip Quast, Robert Mammone and Wendy Hughes are all excellent. Porter shines in a difficult role that is not immediately appealing, and yet is always understandable – she never crosses the line to melodrama. Quast, in a role destined to forever remove the taint of 17 years on ‘Play School’, plays the personification of the sleepy coastal town’s underbelly of evil with relish, turning the local cop into an image of loathing, pity and despair. Mammone, best known for several performances on Australian television but also featuring in The Matrix Reloaded and The Matrix Revolutions, is the most obvious embodiment of the regret most of these adults feel for the turns their lives have taken, and his quiet emotional struggle parallels the more evident battles of Porter. Hughes is wonderful in a small but important turn as the cheated wife.

Set in Robe in South Australia, the locations and cinematography form an important part of the success of The Caterpillar Wish. There is a sense that all is not quite right within the resort town, and the narrative is perfectly complemented by the changes of the seasons. There are several incredibly striking moments, and images that are remembered long after the viewing – the use of fog, cloud, sun and rain, brilliant in effect.

At just 100 minutes – a short film by today’s standards – The Caterpillar Wish still felt slightly long. The final act is very powerful indeed, but contains several moments that don’t quite ring true, and the final ‘sunshine coming out’ montage is a little heavy-handed. The Caterpillar Wish remains a very strong film, however, and will be enjoyed by anyone who wishes for more from their characters, or simply enjoys seeing young talent perform at the highest level. Highly Recommended.