What is it with Hollywood these days? Those hard working studio folk now seem to be bringing us actual good quality big budget action movies. From Batman Begins and Superman Returns to V For Vendetta, making a great action movie with some actual substance is now cool. 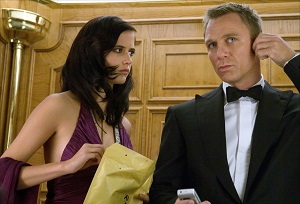 Like the Batman franchise the powers that be have decided to revert to a ‘year one’ concept for the twenty-first James Bond feature, and darn if it wasn’t a brilliant move. James Bond went stale a long time ago. Sure, the flicks were always entertaining, but the day after seeing one it would instantly blur with all the previous ones to form some kind of giant Bond collage of the last twenty years. With Casino Royale we have all that was good about the previous films and a more intense, character driven story to go along with it. The Bond on show here is perhaps the closest to Ian Fleming’s creation that we have seen – a suave and efficient killer, sure… but really a bit of a dickhead. It’s all there, the over confidence, misogynistic tendencies and the fear of castration.

Daniel Craig (Renaissance) has taken the role and made it his own. He’s sexy and debonair when he wants to be, but he’s also flawed and self-destructive. His cockiness is actually his weakness in Casino Royale, and for a change we actually get to worry about his wellbeing, rather than feeling safe in the notion that 007 is immortal. Judi Dench is perfect (as always), and the relationship between M and Bond is different to that which we’ve seen before – she’s still a mentor of sorts but she’s really only just getting to know him. She has no control whatsoever over the explosive Bond, and at times even seems to fear him. There are new actors playing old regulars, with Jeffrey Wright as Felix and Giancarlo Giannini as Mathis, and hopefully Bond 22 will see them return also. It’d be nice if they could actually have some larger narrative that forms over future sequels also, something we haven’t seen in Bond for a very long time.

Mads Mikkelsen plays perhaps the most traditional of the Bond movie characters – as a bad guy with a deformation, but it is refreshing to see that this one doesn’t have his sights set on world domination, like the others invariably did. Eva Green puts in a superb performance as Vesper Lynd, and it’s easy to see how her mix of intelligence and vulnerability could lead to Bond actually falling for a woman.

This is a harder edged Bond. Whilst the action is superb and ever so slightly over the top, not once do we witness invisible cars or deep space laser fights. There are no nifty gizmos and Q is absent from proceedings. The film is kind of lopsided, insofar as the huge action pieces happen in the first half, resulting in a surprisingly restrained final act, and this subversion of our expectations makes the film all the more brilliant.

This recent trend in filmmaking – whereby well known characters are taken back to their beginnings – is interesting. Whilst such films are a starting point, they don’t completely disregard that which has come before, and this reinvention is a brilliant way of getting a franchise out of a hole (even if it sometimes doesn’t work, as with The Sum of All Fears).

Who knows, maybe if Quentin Tarantino had directed Casino Royale (as initially rumoured) it would have been even more impressive, but Martin Campbell has crafted one of the best action movies in recent years. It’s hard to believe that this is the guy who brought us the – execrable – Legend of Zorro).