Heroin and milkshakes are the most prominent vices of Dan and Candy in this tragic romance from director Neil Armfield and writer Luke Davies. Oh, and each other – that’s probably their most significant addiction. 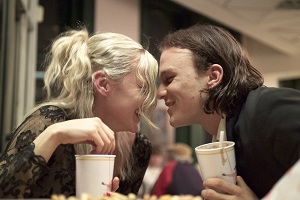 In fact there are very few scenes featuring either Dan or Candy on their own, and such brief moments of solitude are inevitably about the absence of the other person. After seeing him as an agent of the Corolingian Order (The Sin Eater), one of The Brothers Grimm, and a sullen and repressed cowboy in Brokeback Mountain, it’s nice to see Heath Ledger as an Aussie bloke. His performance in Candy is fantastic, as the poet that we never see write, whose life of excess threatens to drag down both he and his girlfriend Candy. Abbie Cornish is spellbinding as the titular character, cementing the verdict many held when first seeing Somersault – she has a huge career ahead of her. The two of them make a fantastically believable couple, sometimes in the most horrible of ways.

Neil Armstrong’s film is expertly put together, and there are no gratuitous scenes. Subtle when it wants to be, outrageous when it needs to be, Candy is a powerful film, and features some darkly humorous moments alongside the more shocking. Special mention should be made of the film’s aural impact also. Not only is the soundtrack perfect, but the sound design is extraordinary, at times elevating the effects to take us right into the characters’ world, at other times more subtle – lulling us into a false sense of security before lashing out once more.

The supporting cast are only disappointing for their ubiquitousness – Noni Hazelhurst (Little Fish) here again as the mother of a junkie, Geoffrey Rush (Munich) as a user that moves in slightly higher circles and Tony Martin as Candy’s father. Their performances are all stellar, and I understand the need for big names in Australian film, but surely there are many less prevalent faces out there in the acting world who would have been just as effective?

←X-Men: The Last Stand The Three Burials of Melquiades Estrada→