When anticipating seeing this film the most important thing concerning me was this: can Ashton Kutcher play it straight?

Luckily, he can, and does admirably in this little parallel universe/time travel thriller. 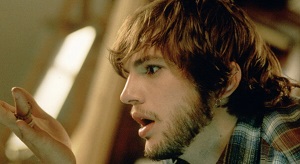 I was surprised to find that this film is actually quite a low budget number. Everything had the level of surrealism associated with low budget films that attempt to look like multi-million dollar productions. The sets at times look rather ‘setty’, and the costumes like nothing anyone would ever wear.

That’s not to say that it is a bad film, by any means. Basically like an episode of The Twilight Zone, this film focuses on an interesting premise and never really strays too far. The first half hour or so starts out fairly disturbing and becomes more so very quickly.

I loved the central love story between Kutcher and Amy Smart, and everyone had a good time playing multiple versions of themselves. (Although I’m starting to worry about what it is that attracts Eric Stoltz to significant yet lesser roles.) I loved the resolution to this film which left me on quite a high – endings are really important in shaping your thoughts on a film… they can make a film (Spider-Man) or break it (a friend of mine once referred to the ‘let’s all go get icecream!’ ending to a certain pirate movie).

I think Gruber and Bress sold themselves short in The Butterfly Effect at times when they let it get silly. If they had taken themselves more seriously I think the film would have been better for it. Some of the narrative mechanics were slightly clunky at times also.

This is a solid thriller that, whilst occasionally predictable, never failed to entertain.