Ang Lee’s new film is a powerfully subtle love story, understated yet involving, and was enjoyable enough for me to momentarily forget that he directed Hulk in 2003. This is easily the most entertaining film of Lee’s I’ve witnessed, particularly considering I was one of two people IN THE ENTIRE WORLD (it seems) who disliked Crouching Tiger, Hidden Dragon (Wo hu cang long). Heath Ledger (The Brothers Grimm) and Jake Gyllenhaal (The Day After Tomorrow) are perfectly cast as the romantic leads in this tale of forbidden love, and though it took a while to get used to their mumbled, often monosyllabic sentences, I soon learned to appreciate the splendour in their silences. A deliberately slow yet enchanting first act is fantastic, as we spend the months up on the mountain with the two men, witnessing their mundane yet difficult duties as guards over employer Randy Quaid’s flock of sheep. We the audience are loathe to see them return to their normal lives – Ledger and Gyllenhall, that is, not the sheep – and to ‘normal’ (read: socially acceptable) relationships. Michelle Williams (Prozac Nation) is stunning as Ledger’s wife, and it’s heartbreaking to watch her realise why her marriage is crumbling before her eyes. It is rather shocking to see Anne Hathaway in such an adult role after The Princess Diaries, but she too is a fascinating character, strong willed and determined, yet for all her casual detachment just as downtrodden as the other women in the film.

Brokeback Mountain thankfully eschews the majority of homosexual Hollywood clichés, and instead provides us with a Ledger and Gyllenhaal we have never seen before. I was hooked almost straight away, and blissfully forgot all the hype surrounding the ‘risqué’ nature of the film, in supposedly pushing ‘minority issues’ into Hollywood. (As if movies have never focussed on minority groups! How many of you personally know any jewel thieves or intergalactic warlords?) It took me a good twenty minutes to even begin to comprehend Ledger’s muttered, blokey drawl, but he is perfectly matched by the more idealistic (yet just as repressed) Gyllenhaal.

The cinematography is stunning, and we appreciate the beautiful vistas even more so when the story shifts to the dull confines in which our protagonists live. Brokeback Mountain is about escaping to live the life of which we dream but very rarely get to experience. To be honest, it is ‘just a love story’, which explains why my rating might seem out of place after my praise. Also, there’s nothing much original about this film apart from a clever break from the cowboy genre, but Ang Lee’s tale is beautiful, captivating and tragic. There are a couple of predictable plot devices, but Brokeback Mountain’s strength lies in its bold simplicity, how so often the things we truly crave are denied to us.

With any upcoming release, there is a tension between revelling in the anticipation – downloading the trailers, reading advance reviews, watching interviews and ‘making of’ promos, or just absorbing the vibe – and trying to avoid any forewarning of the plot to allow a truer experience upon finally seeing the film. In terms of both controversy and unadulterated praise, Brokeback Mountain has been the ‘one to watch’ for some time, but it pays to try to divorce oneself from the uneducated opinion and rapturous applause and enjoy this simple tale for what it is… and ignore what it isn’t. Forgetting all the hype, Brokeback Mountain is a fairly straightforward story – boy meets boy, they fall in love, but their love can never be. It is the grandeur of the performances, the stunning direction, and the magnificent images that make this a wonderful film. 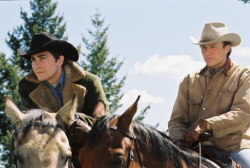 Great romances are often built on short but intense experiences, and that of Brokeback Mountain is no different – a bond forged over scant weeks together that will last a lifetime, both enriching and haunting Ennis and Jack until their end. The subjugation of desire in favour of ‘right’ and ‘proper’ seems to be the strength of Ledger’s Ennis, but Annie Proulx’s story shows that love has a power all its own, and won’t be held back for long. The ramifications of the time on the mountain will echo for both these men, causing emotional and marital difficulties, sexual confusion, and a life spent looking back instead of forward.

Ang Lee has managed to coax brilliance from a heretofore unknown source, with Heath Ledger finally paying audiences back for sticking with him in spite of films like The Sin Eater. Ledger’s Ennis is quiet, unassuming, and leaves most things unspoken, much in the tradition of old-time Western heroes. His face expresses his doubts and fears, but also his heart. Ledger is powerful in this role, displaying strength, grace and conflict with a look or a quiet, (okay, mumbled), word. Alongside Ledger, Jake Gyllenhaal is also excellent, although he never shines quite as brightly as his colleague. His Jack carries the role of expressing aloud what both men feel, Ennis being too proud or stubborn to admit to his emotions, and although this leaves him with some occasionally awkward dialogue, Gyllenhaal always manages to avoid seeming trite.

The female co-stars, Michelle Williams and Anne Hathaway, limited as they are by small roles, both manage to steal scenes at times, with Williams particularly given the opportunity to bring true dramatic tension to her turn as Ennis’ long-suffering wife. Randy Quaid appears briefly, but doesn’t manage to quite pull off his role as the symbol of the real world intruding on the mountainside idyll. Graham Beckel as Hathaway’s father is the only of the players that falls into cliché – his old school father-in-law is annoying for much of his screen time.

Ang Lee displays a deft touch in directing this film, neither lingering too long on the wondrous outdoor settings that symbolised for me the unbounded passion Ennis and Jack feel, nor too short on the claustrophobic, run-down, without-ambition lives they lead when not together on Brokeback Mountain. He allows Ledger and Gyllenhaal to drive the drama, but seems to choose just the right moment to throw a spanner in the works.

Featuring stunning landscapes and equally wonderful performances, Brokeback Mountain is an excellent portrayal of love in spite of the world. It speaks to the romantic in all of us, the lover within who dreams of one day experiencing such passion for another.