Katherine Paterson’s Bridge to Terabithia was a book I had to read for school in year 7. I do have fond memories of it, though when I first saw the trailer for the film I couldn’t believe the changes that seemed to have been made. Obviously riding on the success of the current kids’ fantasy craze, the powers that be decided to up the fantastical quotient until Terabithia resembled Narnia. There was the rope over the river, but there were also treemen and fairy knights. What had they done to Paterson’s book?! 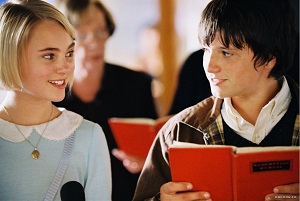 Thankfully, however, the film stays true to the spirit of her novel. This is a delightful (if slightly old fashioned) tale of two kids who don’t fit in, finding each other and creating a world to which they can both belong. The two young leads are fine performers. Josh Hutcherson occasionally feels a bit like every young, brown-haired male lead in the history of cinema, but still fills the role admirably. AnnaSophia Robb is a revelation as Leslie. Her vibrant performance easily lifts the entire film, and it’s easy to see just why young Jesse would be captured by her imagination. Bailee Madison plays Jesse’s younger sister May Belle, and looks like she’s been doing this gig for years, despite only being 7. The adults happily let their performances seep into the background – Robert Patrick plays the gruff hard working father to Jesse, whilst the always impressive Zooey Deschanel plays the kids’ music teacher, Ms. Edmonds.

The filmmakers have injected more fantasy sequences, but these moments are always relevant to the plot, and never distract us from the narrative. The special effects, courtesy of Weta Digital, are beautiful and the emotional core of the story is never lost as a consequence of the big budget sequences, only heightened. It remains a truly magical tale.

This is a heartbreaking film. Knowing the book meant I was upset all the way through, even in the happy bits, but it is still a wondrous ride. This is produced by Walden Media, who were also responsible for The Lion, The Witch and The Wardrobe, however the morals being pushed seem sound enough. At least that selfish prick Aslan doesn’t appear to make the kids feel awful – there’s enough guilt being forced upon the protagonist that the lion probably didn’t feel his presence was necessary. You do have to wonder at children’s tales that teach through reducing their audience to tears. Don’t get me wrong, this is an uplifting film, I just think it may have almost as many kids crying as the death of Artax did back in 1984.

Bridge to Terabithia is a wonderful film that balances traditional storytelling with the current CGI-obsessed craze. It isn’t quite the adventure that the marketing gurus have been pushing, but it is a beautiful tale.

←The Messengers Blades of Glory→