Pitched as a romantic comedy about losing the one you love in hilarious circumstances, and benefitting in pre-release media from the buzz surrounding Jen and Vince – Are they? Or, aren’t they? – The Break-Up manages only to be a tired and at times frankly offensive tale that does no-one any good, and deserves to be forgotten as soon as the next celebrity rumours hit the stands. 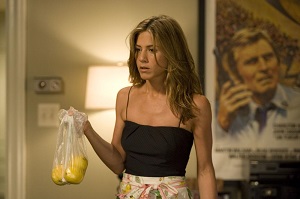 While The Break-Up does defy certain of the conventions of the genre, and spends far more time in the destruction of the central relationship than in its construction, much of the characterisation is pure cliché. Vince Vaughn gets the worst of it, playing a caricature of a man-child that could only have been dreamed up in this post-feminist world in which men must be portrayed as dullards. His Gary Grobowski is so self-focussed he can’t see how lucky he is, but he is also lazy and inconsiderate. Choosing to hit all of the stereotypes of the young man that won’t grow and up and face responsibility and commitment in an adult manner – computer games being the most obvious mode, but the desire for a pool table, poker nights and having a best mate who runs a bar fill out the list of supposed character flaws – the writers have produced a ridiculous and superficial representation of modern masculinity that should be offensive to both men and women.

It is not only Vaughn that suffers, with Aniston lumped with a similarly banal list of ‘successful woman’ traits that allows her no real substance, and a lack of depth that is shocking to behold. The politics of this character are intriguing – not only is Brooke a successful businesswoman who is strong and powerful in her own right, but when faced with the obvious truth that her chosen mate is not her match, she stridently stands up for what she deserves and leaves him… only to attempt to win him back with a ‘Telly Savalas’ when she realises she misses him. What message is being sent here? This confusion leaves her with such a mixed platter to deal with it is any wonder Aniston fails to cope.

Alongside the two beautiful stars are many of Vaughn’s buddies from previous outings, including Jon Favreau, Justin Long and Jason Bateman, however none bring anything of worth to their roles, with Long especially inadequate. The only of the performers to truly expand their range is Vincent D’Onofrio who adds bumbling and lacking in confidence to his impressive repertoire. His scenes with Vaughn are the only of tension or amusement in the film. Judy Davis has debased herself by appearing here.

There are occasional moments of levity in this horrible little film, most coming through the interactions between Brooke’s culture-appreciating family and Gary’s who have a clear distaste for such things – Vaughn shows rapid-fire wisecracks are clearly what he knows best – but when boiled down this is an overlong treatment of a reasonable idea done poorly. Save your money.

Surprisingly, The Break-Up spends a lot of its time being serious, not even trying for laughs. One could argue that it attempts to follow in the footsteps of Chasing Amy, which had a very sombre and dramatic second half, but Peyton Reed’s film fails to analyse anything particularly interesting about relationships. Instead it opts for male and female stereotypes, as mentioned by Mark – the male is a lazy slob whilst the female is an uptight whinger.

A lot of the film is simply banal, and their problems seem so insignificant. 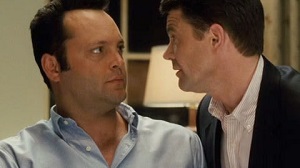 Sure, in real life relationships can implode as a result of the slightest malfunction, but this doesn’t really make for a thrilling narrative. Although less than faultless, The Perfect Catch (Fever Pitch) took a rather mundane characterisation (the male’s obsession with sport) to the extreme, with entertaining results.

Vaughn (Wedding Crashers) is fine, and Aniston is dull as usual (she’s only ever impressed me in The Good Girl). The supporting cast on the other hand are brilliant, and this only compounds the tragedy. Joey Lauren Adams, Vincent D’Onofrio, Jason Bateman and Cole Hauser all shine in surprising roles.

That The Break-Up chose to be serious rather than comedic is not a problem; neither is the fact that it chose to be downbeat, but the film’s flaw is that it fails to be insightful or clever in the way good romantic comedies can be. There’s nothing for the audience to do but sit back and wait for this tiresome twosome to slowly work out what we the audience have known from the beginning.