I’m writing again, even though I never got a response to my last letter. Not that I necessarily expected one – you’re a busy man, what with last year’s United 93 which critics and viewers adored – but after the criticism that followed The Bourne Supremacy one might have thought you’d have reconsidered a little this time around. Or they’d have hired a new director. I’d never have thought I’d be stifling nausea through another of your films three years on. There is much potential in the character of Jason Bourne, and you’re obviously fond of him. The amnesiac killer with a conscience, on a journey of self discovery and revenge… what’s not to like? Who wouldn’t enjoy watching his travels around Europe (seemingly unbothered by passport control), all the while offing any random bad guys who cross his path and forever coming up with just one more lead to follow straight back (of course) to his former controllers in the CIA? Super viewing, and his fighting skills make him a winning leading man to be sure.

I wonder, though, if you had time to consider my suggestions after your last Bourne movie? I was a little narky, I admit, but I don’t think my criticisms were out of line and I’d kinda hoped you might have adapted your style a little more for Bourne Mk III. Sure, there are those (myself included) who applauded your direction of Bloody Sunday, and thought the handheld camerawork and snappy editing encouraged a ‘documentary feel’ that truly added to its immersiveness. I even own a copy on DVD, although I bought it ex-rental, sorry. Alfonso Cuarón used similar techniques to stunning effect in Children of Men, so perhaps you might feel unfairly singled out when reading responses to your latest handheld abomination.

It’s not that the underlying story doesn’t have the potential to be a first rate spy thriller – it’s really that your insistence on the cinematographic techniques you so clearly love inhibits the audience’s ability to actually see your creation. Bourne is rarely in focus, certainly not for more than a second or so, and his fight scenes are so rapidly edited and poorly framed as to be unwatchable. I’m not the first to wonder what it is you don’t want us to see.

In addition to the ‘visual style’, your use of flashback as exposition is clumsy and overbearing. If Bourne spent half as much time thinking about his past as you suggest, we’d be done already as an assassin would have killed him in one of his out-of-body periods. Important plot points are reiterated – just in case we didn’t get it the first time – and this retreading of ground already covered makes the 111 minutes running time seem far longer. Finally, there are several major recurring characters in this film, and yet you assume your audience will have seen the past two and give new viewers no character data at all. Some may wonder who these people are, and others will just blithely watch without ever knowing the rich history they and Bourne share. I wonder if they will enjoy it, though, as trying to keep up with the lack of introductions may distract them from attempting to follow your visuals.

It’s not that I don’t think you’ve got it in you, Mr Greengrass, it’s just that I’d love to see what you work so hard (and spend so much money) to create. As things stand, I spend most of my time suppressing my gag reflex and trying to stop the vertigo. Enough is enough.

Whilst Mark has a handheld camera-induced aneurism, I shall offer an alternative view.

Ultimatum is easily the weakest of the three Bourne films, but still a lot better than a lot of the action movie guff out there. Over the years I’ve held back from altering my original rating for The Bourne Supremacy. Repeated viewing has actually led me to enjoy the film more. 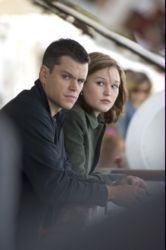 This could be because a: I’ve forgotten how the trailer ruined a major part of the film; and b: I’ve been able to decipher some of the most cluttered sequences (cinematographically speaking). It is certainly one of the better sequels in existence.

By comparison, Ultimatum comes off as a little more shallow. Aside from one very clever narrative device and one unexpected sub plot, the film is a little less believable and a lot more lightweight. The plot is okay, but feels like a small idea stretched too thin over two hours. The action scenes are strong but not as impressive as those that came before, and the car chase doesn’t come anywhere close to the brilliance of the first two. Of course, after five years it’s hard to expect any final revelation will stand up to our expectations, and the last twenty minutes are the weakest in the film. Disappointingly, Ultimatum also features some gratuitous action movie dialogue, something the first film in particular was so good at eschewing.

David Strathairn is a welcome addition to the cast, but unfortunately he gets lumped with the majority of the redundant lines. Joan Allen gives another strong performance, yet she’s so thin now it seems she would snap in the wind. Julia Stiles is great, and who’d have thought a bit part in the original would lead to her being the only other character in all three films?

The handheld camerawork does go a little too far, I must concede. The car chase is a wasted effort simply because it’s so confusing. It’s a pity, because the dialogue-driven scenes work wonderfully with all the over-the-shoulder, ‘dirty’ close-ups. Greengrass has to realise that some of the more frenetic scenes needed to be clearer.

It’s frustrating, cos I can remember working hard convincing people of The Bourne Identity’s worth (not many saw it at the cinema); and yet with each film (as is often the case) box office earnings have escalated whilst the quality gradually dropped. As I said earlier, The Bourne Ultimatum kicks the crap out of most contemporary action movies, it just doesn’t hold up against its predecessors quite so well.