From how Borat: Cultural Learnings of America for Make Benefit Glorious Nation of Kazakhstan has otherwise been received, one could be forgiven for thinking that Sacha Baron Cohen is the comic messiah. The plaudits have generally made reference to his satirical take on US culture, and his ability to draw ‘revealing’ admissions from his interview subjects. Disappointingly, the experience of watching Borat after this level of anticipation is much like that of many supposed ‘blockbusters’ – the reality is far less than the hype. 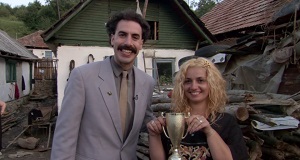 Most readers will by now know the basic structure of the film is mockumentary – Baron Cohen interviews real Americans in character as Kazakhstani television reporter Borat Sagdiyev, and offends or provokes them in some way, such that they respond in what becomes an ‘insight’ into American culture. Whether those being interviewed (or mocked, as it may be) were fully informed is another issue… reports of legal action by both the drunken frat-boys and several Romanian villagers used as extras mean the viewer must consider whether this was ‘all in good fun’ after all. Hung together over a wafer-thin plot, this collection of real-life scenes is supplemented by staged sequences involving Borat and his producer, Azamat Bagatov (Ken Davitian in a rather thankless role).

While there are certainly laughs in Borat, much of the humour lies at the bottom of the barrel – the hilarious (but rather prolonged) naked wrestling and chase scene between Borat and Azamat is the best example. It is almost impossible not to be moved to laughter at the sight of the hairy and sweaty Davitian being beaten by the similarly undressed Baron Cohen, and yet the appeal lies surely in the lower realms of comedy. Several running jokes also are amusing, including the seemingly innocuous chicken in the travel bag. There are many scenes that just don’t quite work, however, including those that must have been expected to provide much mirth. The dinner party scene, in which Borat pushes some conservative upper class Americans just to see how far he can, is uninspired and particularly disappointing. Instead of intelligently drawing them out on their assumptions and possible prejudices, they are bluntly prodded by Borat behaving in an incredibly base manner, and although it is mildly amusing, Borat misses a golden opportunity to really discover how these Americans think. There are also sequences in which the only honest response can be ‘yeah, so?’. Singing the ‘national anthem’ of Kazakhstan (Kazakhstan greatest country in the world. All other countries are run by little girls etc) at a rodeo to the tune of Star-Spangled Banner is only going to provoke one response, and one wonders how anyone could be surprised.

Borat also relies far too heavily on displaying his own (many) prejudices to encourage others to admit theirs – racism, sexism and homophobia only start the list. Baron Cohen knows that behaving in this way is bound to make viewers uncomfortable, and uses this to advantage in encouraging an exploration of political correctness and social acceptability. It does become wearing though, to see yet another example of Kazakhstani anti-Semitism, when perhaps the point has been made already.

Borat and Azamat are convincingly played by Baron Cohen and Davitian, and they are certainly a charming pair. Perhaps with a stronger plotline than the incredibly flimsy one on show here, an interesting movie about the experience of a foreign national on a road trip in the US may have developed. As it stands though, Borat is a disappointing mess of wasted promise.