This film is testament my long-held belief that there should be more female writers and directors in film. Despite having a very ordinary title, Blue Car is a fantastic film that examines modern teenage femininity in a supremely talented, intelligent and insightful way. 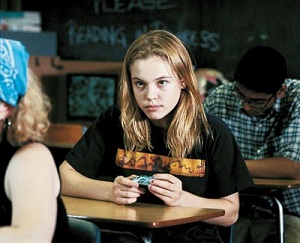 Blue Car would have been a great title for a book. And in fact most of this film plays out as a book would. The peaks, troughs and climax are dealt with in a manner much like a novel. Now, it must be taken into account that I watched all the deleted scenes on this DVD, which certainly lead me to the above conclusion.

I was immediately drawn into the world of Meg, and there was a chilling sense of foreboding running as an undercurrent to my viewing. Agnes Bruckner Is superb, particularly in the highly emotional and/or squeamish scenes. David Strathairn is also perfect, in a role that could be seen to be career-ending (although everyone said that about the actors in Happiness, and I’ve seen many of them go onto plenty of other films). Rather than the usual cathartic tragic teen drama, this is a film that knows just when to hold back, and when to go at it hammer and tongs.

The only complaint about the film (apart from my rant above) is that the cover seems to completely contradict the tone of the film. I’m holding back here so as not to spoil the plot, but this ultimately feminist tale is ruined by a cover that seems to be pandering to a simple-minded and sexist male audience.

Blue Car is fantastic. One of the rare occasions in the last year when I’ve been really taken by a film.

I’m afraid I can’t agree with Stuart here… I was quite disappointed in fact, having only watched it due to his review above.

Bruckner is excellent as Meg, delivering the right amount of nuance and subtlety to her portrayal. How a younger person, seventeen at the time of filming, could have such skill is always beyond me. Strathairn is also excellent, although it was never clear to me what was going to happen – either I’m not as gifted at plot discernment as Stuart, or he’s much more suspicious than me. Whatever, Strathairn’s choices didn’t seem entirely believable to me, and his role actually felt it was two halves, with separate stories. I hadn’t seen Colin since ID4 and she was reasonable in a limited role.

Whilst the acting was predominantly good, the plot wasn’t brilliant, and the choices faced by Meg not entirely acceptable to me either. Her final betrayal and its effects are only hinted at, and I would have liked to have seen some more of her struggling with her decision making process, rather than just a revenge without consequences as it was played out here.

I was never sure exactly why the younger sister was in the script at all. The basic plot had enough tragedy and drama in it to survive without what happened to her. Lily felt gratuitous to me, which is a shame, as the message of her character is an important one. Perhaps our readers will send me hate mail, but I just was not sure why Meg reacted in the ways she did to Lily’s eventual character arc, and her reaction seemed brief and not truly believable. Sure her goal was something she had focused on for a long time as the saviour of her situation, but to spend a happy day swimming at the beach so soon after what happened to Lily? Disappointing.

This is a good film, but not a great one. Whilst it is apparently a film for teenagers (?!), it wouldn’t appeal to many, and the cover of the DVD is deceptive and misleading. I enjoyed seeing Bruckner for the first time, and Strathairn is always great. It is not a fun film, and it’s not easy to watch. It’s also uneven in parts. Watch it if you enjoyed American Beauty or Happiness.