Black Snake Moan is an interesting film. The trailer to Craig Brewer’s post Hustle & Flow feature made it seem like some sort of out there black comedy, but once you get past the whole Samuel-L.-Jackson-has-Christina-Ricci-almost-naked-and-chained-in-his-house gimmick, it’s an altogether different beast. 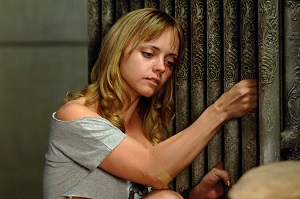 What we have is essentially an odd couple feature – both Rae and Lazarus have their own demons to fight, circumstances throw them together, and they eventually learn valuable lessons yada, yada, yada. But the journey through what might seem to be a rather generic narrative is actually rather powerful.

Jackson’s been one of the hardest working men in Hollywood, averaging about four movies a year since 1989, and as we know the quality of these films can never be guaranteed (Snakes on a Plane, I’m looking in your direction). Here, however, he really knocks your socks off as Lazarus. This old-fashioned, blues-singing, corn-harvesting bloke has sure made a comfortable if frugal life for himself, at least up until the opening of the film, when it all goes topsy turvy. When Rae makes her scantily clad entrance he eventually takes it upon himself to ‘cure her’ of her self-destructive behaviour. Ricci throws herself completely into her performance as Rae, a woman whose strengths and weaknesses lie side by side.

The newspaper headline would be ‘Nymphomaniac Held Hostage by Man Who Finds Solace in Radiator’, and it’s really only through Brewer’s deft writing skills that the film ends up being so much more than the concept. All of the main characters have their own flaws, and all need something to hold onto. As with Hustle & Flow, music is at the forefront of the film, and it features a brilliant blues soundtrack.

Black Snake Moan sits uneasily between fable and lightweight drama, but I think Brewer struck the right balance. It walks a fine line, hinting at neat solutions to problems but then showing us that there is no certainty in life. That it’s not quite as topical or confronting as expected may disappoint some, however.