The concept behind Black Sheep was never going to make a brilliant film, however I thought that at the very least it would be a bit of a b-grade laugh. Unfortunately Jonathan King’s debut feature is far from hilarious, and for the most part rather dull. 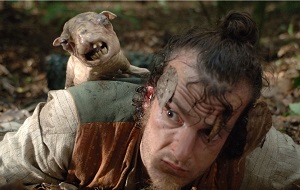 It was marketed as a throwback to Peter Jackson’s early blood-drenched low budget shockers Bad Taste and Braindead, but Jackson’s films achieved so much more with less at their disposal. More impressively, they had a sense of escalation that’s sorely lacking in Black Sheep. The script feels like a random collection of scenes, rather than a gradual progression of ideas. The characters run back and forth, often seemingly oblivious to the dangers revealed pretty early on. There are some great notions, but they needed to be honed down and shaped into something a little more focused. The film dragged most of the way, even though the running time is a trim 87 minutes.

An eight foot tall weresheep is a pretty cool monster, and the special effects are nice. Perhaps the best aspect of the film is when they simply used real sheep. There’s something unsettling about a bunch of ’em just standing there in the field, staring at you. Their dim-witted yet single-minded attitude is rather reminiscent of the classic movie zombie. The CGI is saved for the really necessary parts, and the animatronics are pretty impressive. Unfortunately, the washed out image does the film no justice. Though it might be the current trend to present a thoroughly blue film (remember Miami Vice?), the lack of warm colours works against natural beauty of the New Zealand countryside.

The performances are fine for the genre, though many of the jokes fall horribly flat. To be fair, only the most brilliant of performers could translate some of the lamer moments into zingers, but there were a number of uncomfortable silences when a punch line had no effect whatsoever on the audience.

I really wanted to get behind Black Sheep, but it simply fails to entertain. The only way in which it succeeds is the gore department – there’s a lot of icky and squelchy stuff thrown about, but again, the individual production values simply serve to highlight the flaws in the writing and pacing.