Broken Lizard have never been able to top their first feature outing Super Troopers. Whilst that 2001 flick wasn’t perfect, it did feature possibly the funniest first 15 minutes in film history. 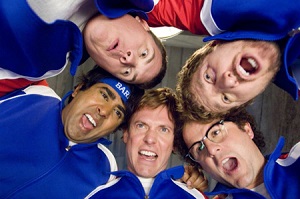 Beerfest is a disappointment primarily cos it’s not very funny. Surprisingly, it’s not that the script is full of jokes that miss their mark, rather that there are very few jokes at all. In fact, the majority of the film is taken up by a whole lot of rather dull plot developments. When it does hit the mark, it’s hilarious – typical of Broken Lizard’s humour at their best, but these are few and far between. Even more frustrating is the fact that the trailer featured not only funny lines that were cut from the film, but edited versions of jokes that were actually more effective than in their original form.

Another major problem is the film’s central characters – Paul Soter and Eric Stolhanske simply aren’t interesting enough in their roles as Jan and Todd Wolfhouse, heirs to an ancient beer making recipe that gets them in all sorts of trouble. As the rest of the Broken Lizard regulars pop up things get a little more enjoyable, but this never redeems the film. I’d like to say that Jürgen Prochnow is scraping the bottom of the barrel appearing in a film like this, but unfortunately he was in House of the Dead. There are a couple of surprising cameos (and one in the first five minutes) but they aren’t enough to save Beerfest. It has to include the most exaggerated ridiculing of Germans ever (or at least since Top Secret!), but it’s so over the top that I’d like to think it’d be hard to be offended.

To give credit where it’s due, however, this film does seem to feature a lot of real drinking. Even if it was a substitute for beer, the cast must be congratulated on consuming so much liquid in the interests of their art.

Definitely a film you can wait to see on DVD… or miss entirely.

←The Devil Wears Prada The Departed→