The explosion of reality television over the last decade or so has, not surprisingly, been reflected on the big screen. Most recently I saw My Little Eye, a nice low budget thriller that played with the Big Brother idea. I have a feeling that Battle Royale is based on an old book, although I couldn’t find out on the internet. If any readers know, please enlighten me. 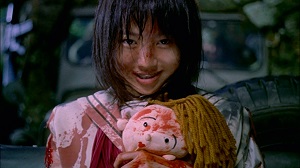 I can’t describe how incredibly overjoyed I was when I first saw Beat Takeshi appear in this film. I’m a huge fan of his films (which he writes and directs under the name of Takeshi Kitano), and he’s awesome in Battle Royale. His deadpan style works wonders, a sadistic killer one moment, self-deprecating buffoon the next. I can see why he would have been attracted to this role.

Once again I found myself watching a Japanese film with sub-standard picture quality. I’m truly not sure if this is a stylistic decision across the board, or if it just happens I have been seeing dodgy transfers, or if they simply didn’t have enough money. Some days I’m ashamed to admit I long for the shiny, unrealistic Hollywood look, even if it means something washed out like Se7en.

There’s a whole lotta hacking and shooting going on in Battle Royale. This movie is very violent in a grisly way, but then again that’s the point. The film examines modern society’s tendency to push to extremes; and the most primal of urges – that of self-preservation. The emphasis is definitely not on the action, however, rather the horrible consequences. Thus it is not an action film per se – no slow-mo heroics. There are, however, some cheer-worthy moments.

I couldn’t say whether the young cast were particularly good or bad actors – they’re spending most of the time trying not to get killed. Beat Takeshi however, has the ability to really sink into his role.

This is an exciting, action packed film that throws us right in the thick of it practically from the word go. The only problem is that I felt no particular bond with any of the characters, just wondered who was going to pop off next.