Wow. I gotta say this film in no way held back. It’s incredible to think how much work went into a movie like this. How many camera operators, set builders, stunt people, gaffers, caterers, gophers and best boys. It’s during a film like Bad Boys II that you wonder if maybe the extravagant amounts of money being put into films wouldn’t be better spent elsewhere. Seriously, this film has at least three car chases!

Not that Bad Boys II is a bad film, by any means. It is entertaining, if overlong (I had to watch this in two parts), and they are keeping up the Lethal Weapon tradition of buddy cop films. 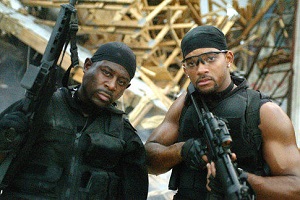 Also I reckon this film has gotta take the record for the highest number of civilian casualties (at least out of all the cop movies – Akira doesn’t count). Not that they show you the dead civilians, but come on! We’ve got lots and lots of speeding cars blowing up! In the first 35 minutes there would have had to have been at least 20 dead bystanders.
Joe Pantoliano has some fun in this film, and it seems that they kinda forgot about Peter Stormare until half an hour before the end of the film. There’s a lot of homophobia and racism here – according to the script writers it seems okay if every minority has a go at the other minorities, so who am I to judge?

A prime example of the excesses of Hollywood movies, Bad Boys II doesn’t achieve anything we haven’t seen before. Laurence and Smith do well (the latter definitely more conformable than he was in I, Robot), and they look like they’re having fun, so why complain?

←Metallica: Some Kind of Monster Bridget Jones: The Edge of Reason→