I don’t think I’ve ever seen a Czech film before. I’ve seen plenty of Hollywood films made in the Czech Republic (The League Of Extraordinary Gentlemen and Blade 2 for example) but that’s not quite the same thing, now, is it? 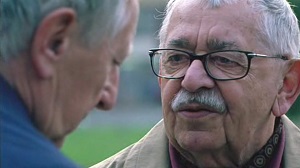 Autumn Spring is a delightful drama laced with comedy (or vice versa, I’m not sure). This is the type of film where you suddenly realise that you’ve been sitting inanely with a huge grin on your face (The Triplets Of Belleville had a similar effect).

It’s rare to see a film where all the main characters are elderly. Obviously this kind of story wouldn’t appeal to a major studio – elderly people don’t have enough money to spend at the candy bar.

Autumn Spring, as the title suggests, is about the paradox of ageing: what if your mind doesn’t want to succumb to the ravages of time the way your body does? Can you be young at heart and still retain the dignity assigned to people your age? It is similar to the Paul Cox film Innocence from a few years ago (but for those who were shocked by that Aussie film, rest assured there are no sex scenes in Autumn Spring).

Though I have never seen these actors before, I could tell that Brodský and Vetchý were masters of their craft. Unfortunately Stella Zázvorková’s performance didn’t seem quite so natural to me, but that helped in conveying the rift that seems to exist between her and her husband.