In its attempt to satirise both American popular culture and politics, and certain well-known political figures, American Dreamz is both too obvious and too late, and instead comes off merely as insipid and dull. 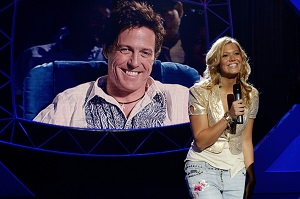 When ‘American Idol’ has made such fun of itself by having specials with those rejected by the judges as being far too bad to be anything but entertainment at their own expense, it is mostly redundant to attempt to make a feature film doing the same thing. ‘Idol’ has been phenomenally successful around the world, and part of its success has been the way it has embraced those whose performances are as embarassing for those watching as those performing. William Hung has long ago had his real-life day in the sun, and yet somehow Paul Weitz thinks we’ll find the antics of make-believe wannabes amusing.

American Dreamz tracks the lives of three characters particularly – the host, a Simon Cowell impersonation done half-heartedly by Hugh Grant; the star, Mandy Moore as a white-trash girl with dreams of fame and fortune; and the laughable, Muslim immigrant Omer, selected only to allow the manufacture of religious tension with a Jewish contestant. Of these, only Omer (Sam Golzari) has any appeal, and he is able to steal away most of his scenes, including those with the more experienced (and supposedly more appealing) Moore. Grant, as mentioned, seems to have only agreed to play half of this role, and his Martin Tweed, written presumably to have a kind of world-weary charm, is the worst example of this film’s missed opportunities.

American Dreamz is also scattered with favourites from previous Weitz films, including Chris Klein, the near-ubiquitous Jennifer Coolidge, and John Cho, none of whom enhance their reputations, although Cho doesn’t have far to fall, with the pinnacle of his career to date the average Harold & Kumar Go to White Castle. (The upcoming Harold & Kumar Go to Amsterdam is only likely to lower his asking price even further).

American Dreamz wants to be satire, it truly does, but as so much of its set-up is lame and predictable, it just doesn’t work. That it takes almost two hours to tell this story is an indication of how slow the first half is – there is so much filler in the early expository sequences, when the film finally does get down to business the characters are already boring. The stabs made at George W. Bush are amusing only for their inadequacy and irrelevance – surely we’ve all made up our minds whether he is an idiot or not almost two thirds of the way through his maximum eight years in power, and any satirist hoping to target Bush at this late stage had better have an amazing new slant to get any reaction. The slightly more subtle jab at the American public for their voting apathy – ‘Imagine a country where… more people vote for a pop idol than their next President‘ – is barely more successful.

Possessing scant charm and lacking any of the dramatic qualities of the excellent About a Boy or In Good Company, American Dreamz aims for several high-priced targets and fails to hit any of them. Over-blown and unnecessary.