In the tradition of Renaissance and A Scanner Darkly, Alois Nebel is a highly stylised rotoscoped animation. Presented in stark black and white, the images hint at cinema noir, even if the narrative doesn’t really live in that genre. 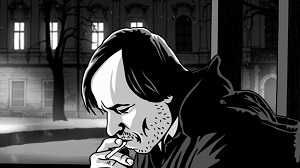 An exercise in the definition of subtle, Alois Nebel does not go out of its way to ensure that the audience understands what’s happening. Set in late 1980s Czechoslovakia in a town near the Polish border, the film concerns the titular Alois (Miroslav Krobot), a station master posted at the local train station. Haunted by a past that involves the expulsion of Germans from Czechoslovakia at the end of World War II, he suffers from blackouts. At the same time, a mute stranger (Karel Roden) appears at his station, on the run from the authorities.

Alois Nebel leaves a lot of blanks for the audience to fill in. The stylised nature of the film itself meant that I wasn’t even sure of the timeframe in which the film was set until I heard mention of the Berlin Wall coming down. There were also pieces of dialogue that hinted at certain politicians and historical events that would only be of use to anyone well versed in Czech history.

To make matters worse, we have a taciturn lead character who is almost entirely reactionary. This adds another layer to the confusion. If we don’t know what he’s doing or what he’s thinking, it’s hard to get a grasp on the narrative itself. It also means, like Snowtown and Animal Kingdom, that it’s difficult to sympathise with Alois. So we have a character who speaks only in monosyllables, who never makes the first move in any situation and, finally, is suffering from some kind of post-traumatic stress disorder and blackouts. You can see why such a protagonist would be a hard sell.

Undoubtedly, however, the film is absolutely beautiful. The stark, crisp black and white imagery makes for some haunting locations and stunning mise en scene. I, for one, would love to see more rotoscoped animations. It’s a striking art form and, if the small budget of Alois Nebel is anything to go by (2.5 million Euros), then it means a lot can be done with very little.

Alois Nebel fails because we’re not given a chance to sympathise with the main character. Unless you’re familiar with 20th Century Czech history or willing to simply sit back and take in the wondrous imagery, there’s not much to recommend.