How on earth can I be objective about a film when it’s full of such beautiful people? It’s bloody distracting. You get a choice of body types with Mandy and Franka, and then you’re annoyed ‘cos you know that Frodo’s got one up on you in the looks department. There should be a law against it. Really… this is why I could never watch Dawson’s Creek… it’s just so damn depressing.

I’m certain that practically all of the cast of The Lord Of The Rings are dying to do a more mundane and real-world drama right about now… and that’s what Elijah Wood’s done. 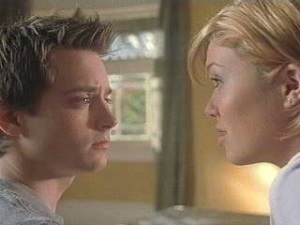 All I Want had a lot going for it, mainly in the casting department (as I’ve already pointed out), but it’s the larger-than-life aspect of the film that didn’t work. The plight of the main three characters was fine, but the supporting cast were just a bit too eccentric for me. The same goes for the daydream sequences, which never quite achieved their potential. I wish that All I Want had treated the supporting characters a bit more seriously, because I think it would have been better for it.

Elijah, Franka and Mandy are all great (and good looking, dog namnit!) and they certainly all shine in less than perfect circumstances. The film looks a bit like a sitcom, in as far as everything is so clean and sparkling – the costumes look like they’ve just come off the rack and the locations look like sets. (In fact it looks a bit like The Gilmore Girls.)

I was drawn into this film as a romantic comedy, but the ending let me down. This is one of those films where you can be CERTAIN that the film’s ending was altered late in the piece. Though I must admit I’m hard to satisfy since neither ending would have left me happy. It seems in this particular context I was hostile to both ends of the spectrum: either the lack of closure, or the cheap ‘sunshine and rainbows’ solution.

Don’t expect to find anything profound in this film. And, contrary to what one might initially think, romantic comedies can challenge you and make you think, as long as they’re handled intelligently and with maturity.

But, my God, they’re all so pretty.