A work colleague just the other day was lamenting the fall of Australian cinema. She complained that very few great Aussie films seem to be made these days. She recalled the mid nineties when we had such great films as Kiss Or Kill. I tried to think about the recent films I’d seen and began to wonder if she was right. Of course Lantana was very good, and Somersault was great (but not excellent). I remembered Rabbit Proof Fence and Beneath Clouds as well, but these great films did seem few and far between. 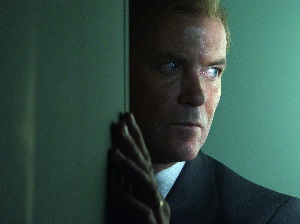 Thankfully in that same week I hired Alexandra’s Project. This film is fantastic. The first hour kept me glued to the screen, desperate to know what was going to happen next. There’s a fantastic sense of foreboding looming over proceedings, and I was just as excited as I had been with Octane, a film I loved that I saw a week earlier.

Gary Sweet is fantastic – in fact he usually is. For some reason, however, his name on the DVD cover is often a turn off for me. I had been hesitant in the past with this film because I’d thought that de Heer and Sweet’s previous film The Tracker was a decidedly average film.

There’s nothing pedestrian about Alexandra’s Project. This is a fantastic thriller, that, while at times predictable, had a profound effect on me.

The cinematography is fantastic. The filmmakers have succeeded in not only working in a confined space, but creating a film that is essentially supposed to be set in the dark. There are a couple of obvious lighting conceits, but they have managed very well to put across the idea that it’s really dark without letting us miss anything.