I don’t particularly like Jack Nicholson. In his old age he simply seems to play the same smarmy Evil Jack in every film. I had, however, heard that this film was pretty good, so I decided to give it a go. 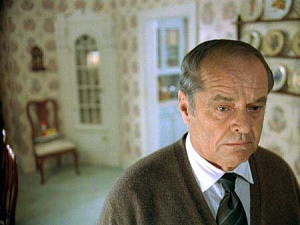 About Schmidt is good and bad. Firstly Nicholson does give a slightly different performance from usual. In fact he barely speaks for the first twenty minutes, and for once I was excited to see he was actually playing a character. Then, as soon as he opened his mouth, the old smarmy evil Jack was there. Apparently he can’t alter his voice one iota. He always sounds exactly the same.

Anyway, the film itself is interesting. It looks and feels much more like a European film than a Hollywood one. The pace is slow, and the characters ever-so-slightly over the top.
It features a good supporting cast. Harry Groener from ‘Buffy the Vampire Slayer’ is here, and Kathy Bates, who actually has a scene where she spoonfeeds a bedridden Schmidt (eerie, I know…but it doesn’t seem to be tongue in cheek).

A lot of this film wandered aimlessly and I didn’t really see the point. In fact it was only in the end moments that I truly appreciated this film. About Schmidt has a great ending, so if you’re prepared to sit around for two or so hours, it’s worth the wait.