Okay so I never like Jean Pierre Jeunet films as much as everyone else. I always appreciate them as beautiful pieces of cinematic art, and the amount of detail that goes into his films is incredible. But there’s something about the occasionally frenzied tone and overall hyperreality of Delicatessen, City Of Lost Children, Amelie and now A Very Long Engagement that bothers me.

In fact the only film of his I own is one that most people dislike – Alien: Resurrection, and that could have something to do with that fact that Joss Whedon wrote the screenplay. 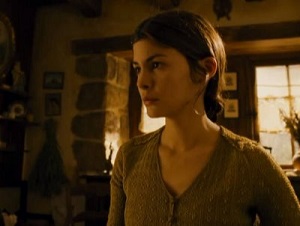 A Very Long Engagement has a very impressive ensemble cast, including the likes of Tchéky Karyo and Jodie Foster (who I’m sure was there simply to show off her French). But like many of his films, very few get more than a few moments in the spotlight.

The overall plot is quite simple but the story devices are quite intricate, and I had to pay complete attention in order to fully understand what was going on, especially due to the frantic nature of many of Jeunet’s sequences.

Of course this film is stunning to look at. The French have an eye for detail which has always been a major part of their special effects. The film has a lovely aged look with lots of yellows and browns.

The violence can be a little shocking, and I felt that it was a little too much for some older members of the audience that expected a classic love story. The line between truthful representations of war and playing up the gruesome nature of the many wounds was a little blurred.

This is a great film, but I never feel like watching Jeunet’s films a second time. If you liked his other stuff you’re bound to enjoy this.