Considering he made Waking Life in 2001, Linklater’s decision to adapt Philip K. Dick’s arguably best known book comes as no surprise. A delirious film, A Scanner Darkly manages to have all the weirdness of Dick’s work without the Hollywood-isation that usually happens (in for instance Total Recall, The Imposter, Minority Report or the otherwise brilliant Blade Runner). I must confess to only having read several short stories from the extremely prodigious writer, but I think I can safely say that this film is the first to transport not just one of his wacky premises, but the narrative drive to the big screen. This head-trip also gets kudos for being (surprisingly) one of the funniest films I’ve seen at the cinema all year. 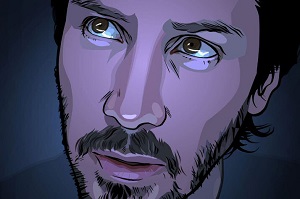 Keanu is actually pretty darn good as the central character pretending to be someone he isn’t, or possibly unknowingly pretending to be someone he is, and maybe the fact he’s drawn over has something to do with the brilliant performance. This is easily one of his best roles. Robert Downey Jr. has a ball of a time, as does Woody Harrelson, both playing characters that are clearly younger than themselves (again, thanks to the rotoscope technique). Wynona Rider is also refreshing, so much so that I couldn’t remember the last film I’d seen her in (turns out it was Lost Souls back in 2000!).

The animation is great. The rotoscope technique accurately captures the human element whilst at the same time being otherworldly enough to be ever so slightly unsettling. This film is bound to become a cult classic, and rightly so – for it manages to hit that ‘bizarre yet oh so relevant’ note perfectly.

I’m desperate to see this film again, cos it managed to remain half a step ahead of me, yet at the same moment continually coherent. Linklater has managed to walk a fine line with A Scanner Darkly, and it’s exactly the type of mind f*ck sci-fi buffs and fans of weird cinema have been craving. Such a freakish film could easily be nothing more than a curiosity, but there is a powerful emotional thread running throughout – this is a tragedy of sorts, focussing on substance abuse and the way it affects not only the abuser but the people around them, and indeed the world as a whole. Subjective reality is one thing – but A Scanner Darkly turns the concept into a terrifying and all-pervasive predator.

Though probably not the ideal film to veg out in front of, A Scanner Darkly is thought-provoking, disorienting and brilliant stuff.