I couldn’t stand Romance. Catherine Breillat’s previous film simply pissed me off – here was a stupid person doing stupid things. I had learnt, however, that fans of Romance hadn’t liked À ma soeur!, so I figured I might enjoy it. 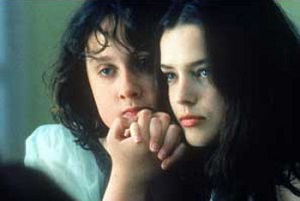 À ma soeur! has two fantastic central performances. Reboux and Mequida work perfectly as sisters, and deliver brilliantly true to life performances. Breillat certainly knows how to get what she wants from her characters, even in such extreme and awkward situations. (I have no idea why any parent would want their child in such a film, but there you go. Thankfully this film isn’t quite as graphic as Romance – most of the sex is inferred rather than seen).

The males in the piece are much the same as Romance – predatory and pathetic at the same time. But this film is essentially about females and not males, so it doesn’t matter if their depiction is extreme.

Now to the most important aspect of À ma soeur!… At one point this film shocked me to the bone. I actually yelled out in surprise/anguish. I’ve seen a lot of films, and this rarely, if ever happens. Thus any film that can produce such a profound effect is pretty darn impressive.

Much more entertaining than Romance, this is a film that actually let me sympathise with the central protagonists, rather than simply disgusting me.