Zooey Deschanel needs to move on. I’ve loved her performance in every film she’s appeared in, even the less than wonderful ones (hello, Yes Man) but we’ve never seen any great variation. Here she plays Summer Finn, easily the most Zooey of all the characters Zooey’s ever played. It’s not just as if the role was written with her in mind, it’s like Summer was created from the parts of her previous roles. As much as I love her alternative sensibilities, casual sarcasm and sexy confidence, enough is enough. 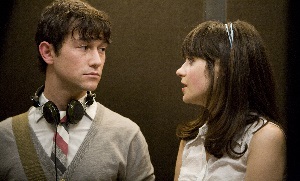 Now, (500) Days of Summer is a fantastic film. It isn’t anywhere near as fun as it is great, however. I spent much of this film cringing. No Tom Hansen (Joseph Gordon-Levitt), don’t fall for Summer! It’s clear that it isn’t heading anywhere good soon. I know you’re attracted to her alternative sensibilities, her casual sarcasm and I know how confident and sexy she is, but it’s not worth it! Watching our hero fall for Summer is agonising in many ways. They get along well, yes. But we know that it isn’t a well-balanced coupling. For anyone that’s ever been in a relationship where the other person’s had all the power, or who’s watched a friend limp through a similar pairing, then (500) Days of Summer is tough work.

Don’t get me wrong, this film is near perfection. The characters are well written, realistic folk, the screenplay is witty, featuring a select number of pop culture references without going overboard into Juno territory, and the representation of the genders is surprisingly different from the Hollywood norm. Tom is an absolute romantic. He daydreams about the perfect woman but is unconfident and self-deprecating when faced with anything approximating that – this is the type of characterisation Hollywood usually reserves for teenage girls. Summer on the other hand believes that true love is a lie and says straight out that she has no interest in long-term relationships.

This in itself is a major shift for a romcom – usually we have to wait until the penultimate act for everything to go wrong… here we can see things falling apart from the word go. As if to drive this home, the film dances back and forth through the 500 days. Whilst never really approaching a Memento-like cleverness (the majority of the film is linear), it’s a clever replication of the memory playback we experience all the way through relationships. The good and the bad are forever swimming around in there, whether or not things are going well in the present.

(500) Days of Summer is up there with Eternal Sunshine of the Spotless Mind for intelligently probing the issues of modern relationships, even if it’s much more single-minded. Gordon-Levitt puts in a sterling performance and for once gets a chance to act the fool, which is a nice change from all the Mysterious Skin-ing, Stop-Loss-ing and The Lookout-ing we’ve seen in recent years. The music and fashion on display are characters in their own right. If you thought part of the point of Garden State was to sell CDs, then you’ll get what I mean about the soundtrack, whilst the costumes have to be seen to be believed – a weird mix of decades past juxtaposed with iPods.

An intelligent romantic comedy, this is a film that doesn’t hold back from exploring the tragedy of relationships.