50 First Dates combines the charm and attraction of the two stars, with some stunning scenery, a great soundtrack… and a fairly ordinary plot. We all loved The Wedding Singer. Don’t even start, Stuart, with your whiny crap about its rubbish plot, poor acting and so on. It is a rubbish film, but its Hoopla Factor is sky-high, so sit down, shut up and listen. Sandler and Barrymore work well together. I shy from saying they are the new Hepburn and Tracy, or even the new Wilson and Stiller, but they have a magic together that works to great effect in 50 First Dates. Although the translation from cheesy Wedding Singer to Hawaiian sex god is seemingly uncomfortable for Sandler, Barrymore works so well as the addled Lucy, she more than makes up for it.

Unfortunately this is another case of the trailer giving away the whole plot, something I know Stu hates, and I’m starting to. Did we really need to know every plot twist before we even entered the cinema? It might be nice, just once in a while, to watch a film as it was intended, and to feel the full effect of the choices made by the writer and director. I guess this is pure romcom territory, and the plot twists aren’t gonna surprise us too much, but still.

The soundtrack is wonderful, particularly the song played over the final scenes, which I have downloaded and enjoyed many times. The settings are stunning, Hawaii climbing higher in my list of must-see destinations than before. The comic relief? I know Sandler and Schneider have a loving relationship, and appear in each others’ films all the time. The piece written for Schneider in this case is not funny. The old Asian man in the diner however, is pure gold.

This is a fun piece of fluff, destined to be enjoyed on a rainy night in. It’s not Citizen Kane, but it’s not supposed to be. Enjoy it for what it is.

It’s always good to see Adam Sandler not playing an annoying dickhead with a stupid voice. He’s actually quite watchable in films such as The Wedding Singer and Punch Drunk Love… it’s a pity about his other films (such as Little Nicky – an insult to humanity in general). 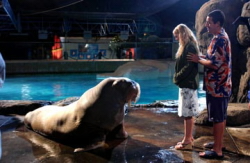 It’s interesting that this film is set in Hawaii – it’s like Punch Drunk Love was a ‘transition’ film.

Barrymore truly shines in 50 First Dates, delivering a fantastic and more importantly believable performance (no small feat considering the subject matter). Unfortunately the great performances end with Sandler and Barrymore. Everyone else is just plain annoying. It’s strange that we can have a great heartfelt story surrounded by such immature and one dimensional characters. Sean Astin does his best in a limited role, and hopefully he’s on the up, and The Lord Of The Rings signalled the end of his dry spell. He’s a lot less tubby here also!

Sure 50 First Dates explores familiar territory – but it’s not that familiar. There’s only been a couple of films at best that have been here before.

I thoroughly enjoyed this film whenever we were following the main characters. I don’t know why Mark suggested I wouldn’t like this film – I’m a sucker for (halfway decent) romcoms, and this one is pretty good.