After such a protracted production period, I was one of those people who were surprised to learn that 47 Ronin would include supernatural elements. Like many, I was expecting a samurai epic, not a Pirates of the Caribbean movie set on land. This factor stayed at the forefront of my mind as I finally saw the film the other day. I kept trying to figure out if the bits with demons, dragons and other mythological beasts could have been added late in the piece, kind of the reverse of what happened with The Lone Ranger. According to Universal’s announcement back in 2008 this wasn’t the case, but even so, such moments certainly felt out of place. 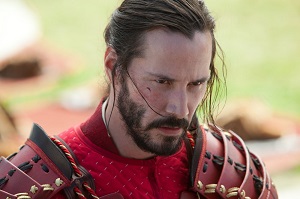 After the ever so awkward voice over intro explaining how Japan is totes magical island sporting a good ol’ mystery shroud etcetera etcetera, we meet Kai (Keanu Reeves), a half-breed who is the lowest of the low in his local village of Ako. When a rival lord disgraces Ako’s benevolent ruler (Min Tanaka), his samurai become masterless ronin, banished from their home. What follows are their attempts to claw back their honour and seek revenge on the evil Lord Kira (Tadanobu Asano).

The production values on display in 47 Ronin are fabulous. There are huge sets and fantastic real locations (no doubt aided by subtle visual effects.) The costumes are wonderfully colourful and exaggerated, and there is an overall sense that the producers didn’t skimp on anything. The visual effects are a mixed bag. The creatures look good in isolation, but their movement all too often relies on blurring and quick cuts, ensuring that we only get a good look at them when someone samurais them to death. Then, worst of all, we get a fox that looks like it’s stumbled onto frame after filming a certain Ylvis video.

Keanu gets the job done as per usual, and the rest of the cast are almost entirely Japanese, which at least makes up for Kai’s American accent. Even so, there isn’t much fun to be had here. Everyone’s so po-faced that the one or two moments of humour generated an disproportionately positive response from the audience. I think everyone came along hoping to see a fun-filled action adventure, but what they got was quite sombre and – let’s be honest – rather boring.

There’s simply not enough going on in this film. It may run for 118 minutes, but it features a threadbare narrative with very little in the way of subplots. The script provides almost nil distinguishing traits for the secondary characters, and the love story between Kai and Mika (Ko Shibasaki) is something we’re told about often enough but never really feel. Also, the family-friendly rating seems strange when you consider the difficulties of presenting a bunch of people using their swords to lop off limbs without a single spatter of blood.

47 Ronin fails by being neither a serious, gritty historical epic nor a fun, fantastical action/adventure. Instead, it’s a pale imitation of both kinds of movie, and has very little to offer aside from some great production values and pretty visuals.