I was completely confounded by the reviews that started to appear before the release of this film. When I first saw the title I was expecting a pathetic teen gross out comedy on par with Tomcats. But then positive reviews appeared in the most unlikely of places. It turns out The 40 Year Old Virgin is a hoot. One of the funniest films I’ve seen all year, and a comedy that actually sustained the humour right ’til the end, a rarity in the genre (even the classic Monty Python and the Holy Grail gets tiresome after a while). Judd Apatow and Steve Carell (Anchorman: The Legend of Ron Burgundy) have crafted a fantastically funny film that has quite a sweet-natured core. The central romance between the radiant Caroline Keener (The Interpreter)and Carell is wonderfully touching, and the rest of the ensemble make sure the film never gets boring. The variation in casting (in terms of multiculturalism and age) works a treat, and everyone gets a chance to be funny.

The narrative kept upping the complexity a notch every ten minutes or so, and I loved the film all the more for it. Just when I thought it might run out of steam it revealed a new character, or a new complication. Sounds like a simple way to make a great comedy, yeah? But as everyone knows, it doesn’t always happen that way.

Yes there’s lots of crude language, but it’s witty and relevant at the same time. Even the most pathetic of premises – the titular character getting his chest waxed – is hilarious in the capable hands of the cast. I know there are a lot of readers who simply won’t believe me, and I can’t blame you, what with the surge of sub-par gross out comedies since There’s Something About Mary (anyone remember The Sweetest Thing?). This is a film that I wasn’t ashamed to enjoy, unlike Must Love Dogs, which I appreciated in defiance of its many, many flaws.

This is THE pleasant surprise of 2005 for me.

Having also been surprised by the glut of mostly positive reviews for this unappealing comedy, my expectations were perhaps slightly higher than they would usually have been. Yes, our message board member Josh told me as I drove to the cinema that I was wasting my time and would surely hate it, but if Margaret and David liked it, surely it couldn’t be that bad? Sadly, I was let down by yet another in a long line of ridiculous ‘comedies’ from Saturday Night Live alumni. 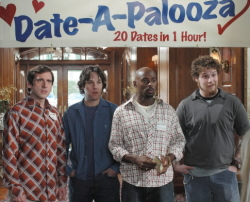 Steve Carell is not well-known in this country, but his star is ascending as rapidly as Will Ferrell’s before him. With small parts in Anchorman: The Legend of Ron Burgundy and Bewitched, and the lead in the apalling US remake of ‘The Office’, he is likely to grace our screens in many frat-pack films to come. Given his singular lack of appeal, this is remarkably disappointing. His efforts in The 40 Year Old Virgin are laughable – he seems not to know whether to play the straight man with a heart of gold, or go for slapstick or gross-out humour, and his eventual portrayal is a mish-mash that makes him a completely unappealing romantic lead.

Catherine Keener is the really the only shining light for much of this farce – her single grandmother is developed nicely, and she is streets ahead of any of her colleagues in terms of acting nuance. Why she chose to appear in this isn’t immediately clear, although it does seem likely she will successfully shed the tough-girl (Being John Malkovich, The Interpreter) image and move into romcom territory, given her appeal here.

There are occasional moments of good scripting, predominantly for Keener and Seth Rogen, who certainly makes the best of some funny (and abusive) material. Unfortunately, the laughs are so far spread between drawn out set-ups and boring characterisations (Paul Rudd’s David is a primitive, underdeveloped one-trick), that I spent much of my time wondering if I could get any more bored.

Seeing this one day after the inadequate but vastly more insightful Must Love Dogs, I am struck by the difference in appeal of these two films with similar intentions – they both explore the pitfalls of dating for older (by which I mean no longer in their early twenties) people. Perhaps with maturity comes different expectations of how best to illustrate these difficulties? Many of the audience for The 40 Year Old Virgin had barely started shaving, and they seemed to be having a ball. Whilst Must Love Dogs only barely makes it as a romantic comedy, it does at least show some insight into Sarah and Jake’s lives, whereas The 40 Year Old Virgin cares only that Andy can be made fun of.

Whilst there are sporadic amusing moments, the majority of the ‘comedy’ is lowest common denominator only – examples of Carell’s finely developed wit include seeing a man with a morning erection urinate on his own face. If this sort of thing floats your boat, run, don’t walk, to your nearest multiplex and sit there with all your mates and laugh uproariously at the ‘antics’ of these ‘characters’. If you require anything more meaningful or subtle, stay well clear.