5 years later, to be more precise, Juan Carlos Fesnadillo has brought us a bigger-budgeted, somewhat glossier sequel to Danny Boyle and Alex Garland’s brutal low-tech hit 28 Days Later…. Fesnadillo previously made the curious Intacto in his native Spain, a brilliant yet flawed thriller about luck as a commodity, and here he does honour the original 28 Days Later…, but thankfully starts from scratch with new characters. 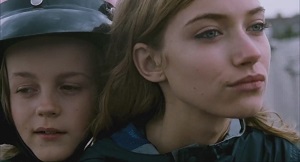 As a sequel, 28 Weeks Later most closely follows James Cameron’s Aliens. Repopulation has occurred in a United Kingdom previously overrun by victims of the ‘rage’ virus. American NATO troops are present overseeing the civilians being returned to the ‘safe zone’ on the Isle of Dogs. There’s even versions of Newt and Timmy, the kids from Aliens.

That’s not to say that Fesnadillo’s film is simply a rip-off. After a stunning opening scene, the film manages to both reflect the original and move the meta-narrative forward perfectly. The pacing is spot on, and the ever-present snipers patrolling the top of London’s buildings are a brilliant idea. Surveillance will play a rather large role in the first half of the film, and sets up perfectly what will happen when things start to go wrong.

Currently riding a wave of roles, Rose Byrne plays Scarlet, a Major in the American forces who is among those admitting the civilians to England. Idris Elba plays a much smaller role (but it’s better than being in The Reaping) as Stone, the commander overseeing the whole operation. Robert Carlyle is father to the real stars of the show, newcomers Imogen Poots and Mackintosh Muggleton, who deserve Oscars by virtue of their names alone.

The film starts out strongly, with some solid character development. There are more shots of a deserted London, this time on a much bigger scale (and from helicopters!). There are some decent frights, and lots of bloody vomit. The tunes provided again by John Murphy don’t pander to action movie clichés, rather providing a sweeping dramatic backdrop. The second half of the film, however, is somewhat like Children of Men – one huge set piece after another, with very little pause for dialogue, let alone drama. It is perhaps because the second half is a bit of a let down that this film missed out on being a truly fantastic sequel.