Murali K. Thalluri’s extraordinary debut film is a show-stopping piece of cinema. From the outset we are alerted to the impending tragedy, and we spend the next 97 minutes following the lives of half a dozen or so high school students in the hours leading up to it. 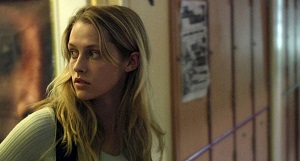 The film borrows more than a little bit from Gus Van Sant’s Elephant, and at first I was unsure how I felt about this. It obviously positions itself in the same genre as the brilliant Elephant, but also mimics the roving steadycam shots and the retelling of the same moment in time from different perspectives. Then, to top it all off, it has one of the characters playing a classical piece on piano that is as haunting as it is beautiful. Admittedly Thalluri does ‘thank’ Van Sant in the end credits, though I’m not quite sure what this means.

To be honest, however, 2:37 is a more effective film. It has all the suburban horror of Elephant yet manages simultaneously to have a real emotional core. You feel for these kids. Time and again I wanted to reach in and shake them, let them know that adolescence isn’t the end, that it gets easier. Thalluri’s script brilliantly captures the teenagers’ perspectives on the world in all their furious and naïve glory. This could be because the man is only recently out of his teen years himself. The fact that he managed make not only a film at the age of 22 in Australia, but this particular film, is an astounding feat.

The kids are brilliant, and diverse enough to keep our attention without being unrealistic (though the absence of a cultural multiplicity is strange). Every single performance is spot on, and none of them drag the team down.

The plotting is at times rather predictable, except for where it really matters, and at no point do proceedings get dull. The ‘scene’ that most people are already talking about is absolutely stunning and will leave you breathless – it couldn’t have been handled better. This is a dark film that deals with horrible, horrible things, and I’m sure it will be misinterpreted and misrepresented again and again, but it is a story that had be told. It shows just how wrapped up we can get in our own lives, to the point where we’re blind to others’ pain. It shows us that no matter how bad things may get, there are always people in the same situation or worse, and this can give us strength.