Believe it or not, I actually had high hopes for this one. None of Emmerich’s super-marketed movies ever really attracted my attention, from Independence Day to The Day After Tomorrow. But this time… woolly mammoths, sabre-toothed tigers, pyramids – where could they go wrong? 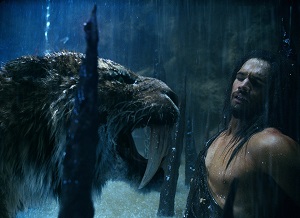 It’s strange, but Roland Emmerich’s filmmaking skills haven’t changed one bit. This still feels like a mid-90s popcorn movie. Mel Gibson’s similar Apocalypto at least broke some new ground in terms of technology. In fact, Gibson’s film succeeded in just about every department that this one fails. Whether or not you like Gibson’s films, he has a strong and recognisable directorial presence, and his films feature many brilliantly orchestrated sequences. The single skill Emmerich seems to display is an eye for the mediocre. The only truly entertaining film of his was Stargate, way back in 1994. It’s telling that some of the best elements of 10,000 B.C. feel lifted from that film.

New Zealand’s busiest export, Cliff Curtis, is pretty ineffectual here as the leader of the tribe. Steven Strait and Camilla Belle are our two young lovers, and they look sexy enough (if not prehistoric) in their rags, but again, the script demands nothing of them. I simply didn’t care what happened to any of the characters, the most involved I ever got was ‘ooh, those boats look pretty!’

The only department that truly impresses is the creature animation. We may still be subject to shitty greenscreen technology, but at least the mammoths look cool. Also, the introduction of the sabre-toothed tiger is an awe-inspiring piece of animation – it’s such a pity that it doesn’t really amount to anything.

The latest in the line of Emmerich’s dull and increasingly outdated ‘blockbuster’ films, 10,000 B.C. isn’t really a worthwhile investment of your time.

←Rambo The King of Kong→